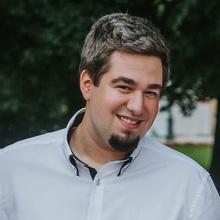 Dániel Kovarek holds a BA from Corvinus University of Budapest and an MA from CEU, and is also a graduate of the Sociology Track of Széchenyi István College for Advanced Studies, a constituent college of Corvinus.

Before starting his doctoral studies, he was a Research Fellow at Republikon Institute, a Budapest-based think tank, primarily working with public opinion polling data. After that, he returned to CEU as a full-time Research Assistant for the CUPESSE (Cultural Pathways to Economic Self-Sufficiency and Entrepreneurship) project, in which he relied on qualitative data from interviews to scrutinize inter-generational value transmission in Hungary. Daniel has extensive experience in qualitative data collection techniques, having conducted over five dozen in-depth interviews with MPs, local political actors, minorities, far-right politicians, as well as young and elderly members of middle-class families. He also has first-hand experience in experimental methods (both in the lab and on the field), in focus group research and survey methodology (as interviewer and designer of PAPI and CAWI questionnaires alike).

His current research investigates how geographical proximity of voters and candidates in terms of birthplace or residence shape electoral outcomes, as well as in-group based and instrumental motivations behind such home area considerations. He also has a side interest in party politics, mostly related to various approaches for measuring parties' ideological and issue positions. In collaborative projects, he works on career patterns and political performance of prime ministers in Hungary and intergenerational transmission of values and resources in Hungarian families.

Extrinsic and Intrinsic Work Values: Findings on Equivalence in Different Cultural Contexts
Where Did All the Environmentalism Go? LMP in the 2018 Hungarian parliamentary elections
Cut from the Same Cloth? A Comparative Analysis of Party Organizations in Hungary
Scapegoat-Based Policy Making in Hungary: Qualitative Evidence for How Jobbik and its Mayors Govern Municipalities

Ideological position of local and national politicians in Hungary [in Hungarian]