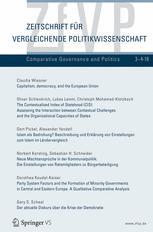 An article has been published in ZfVP (Comparative Governance and Politics) by CEU's researchers, Carsten Schneider and Seraphine Maerz with the title “Legitimation, cooptation, and repression and the survival of electoral autocracies”.

Conceptualizing the “three pillars of stability”, Gerschewski (2013) proposes legitimation, cooptation and repression as the fundamental principles of lasting autocratic rule. Recent studies put this so-called WZB model to an empirical test and probe the effects these three factors have on regime survival in light of autocratic elections (Lueders and Croissant 2014). Their finding that the WZB model has only limited explanatory power in competitive autocracies has sparked a broader debate about the empirical application of the model as such (Kailitz and Tanneberg 2015; Lueders and Croissant 2015). Our paper contributes to this debate in several ways: (1) rather than analyzing each pillar’s effect in isolation, we investigate their combined effect; (2) rather than assuming causal symmetry, we expect to find different explanations for autocratic stability and breakdown, respectively; (3) by focusing on configurations of the pillars, we are in the position to identify distinct types – or “worlds” (Gerschewski 2013) – of (un)stable autocracies. Using the data from Lueders and Croissant (2014) on elections in hegemonic and competitive authoritarian regimes between 1990 and 2009, we apply fuzzy-set Qualitative Comparative Analysis to empirically investigate which, if any, combination of the dimensions of legitimation, cooptation, and repression lead to the survival of autocratic regimes and which ones to their breakdown. Our findings suggest that single pillars in isolation are causally irrelevant; that the WZB model is, indeed, capable of identifying stable autocracy types but it does not perform well in identifying the reasons why autocracies break down; and that the two viable types of autocracies identified by us are meaningfully distinguished by their different legitimation strategies.