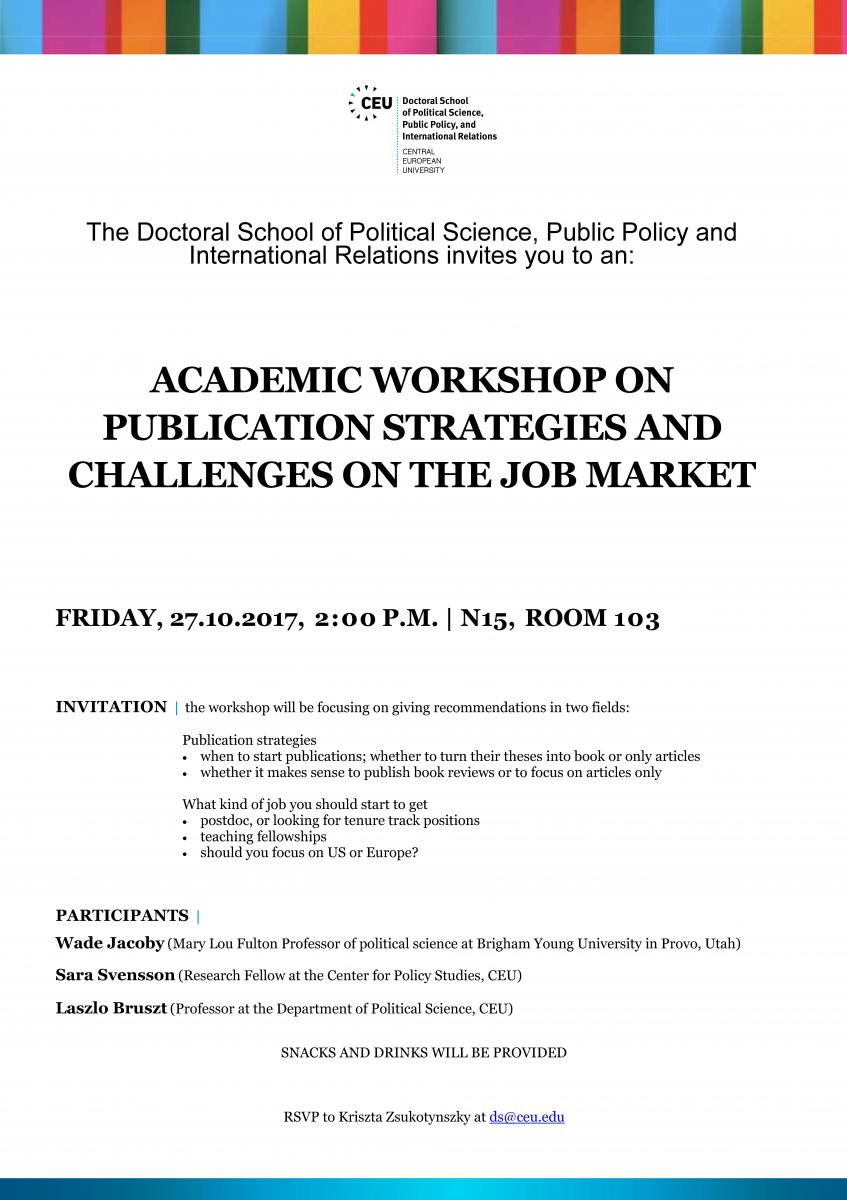 the workshop will be focusing on giving recommendations in two fields:

What kind of job you should start to get

Wade Jacoby is a Mary Lou Fulton Professor of political science at Brigham Young University in Provo, Utah His most recent book is The Politics of Representation in the Global Age: Identification, Mobilization, and Adjudication (Cambridge University Press, 2014). Jacoby is the author of two other books, Imitation and Politics: Redesigning Modern Germany (Cornell University Press, 2000) and The Enlargement of the EU and Nato: Ordering from the Menu in Central Europe (Cambridge University Press, 2004). He has published articles in many journals including Comparative Politics, World Politics, Comparative Political Studies, Politics and Society, European Security, The Review of International Political Economy, The Review of International Organizations, and The British Journal of Industrial Relations. Winner of a number of research fellowships, Jacoby received the DAAD Prize for his scholarship on Germany and the EU and was a Braudel Fellow at the European University Institute. Jacoby is co-editor of German Politics and serves on the editorial boards of Governance, German Politics and Society, and European Security.

Sara Svensson is Research Fellow at the Center for Policy Studies. At the Center for Policy Studies she conducts research on civil society and public administration intersections in Hungary for two Horizon 2020 projects She has taught courses and supervised BA theses at four Swedish universities: Orebro University, Karlstad University, Halmstad University, and University West. She occasionally contributes to broadcast and print media in Sweden, and has worked at different locations as a news journalist for the public service broadcasting company Sveriges Radio. Her academic research focuses on policy formation and governance structures in European cross-border regions, and she has published on that topic in Eurasian Geography and Economy, Journal of European Integration, Regional & Federal Studies, Regions & Cohesion and Journal of Borderlands Studies. She holds a PhD in public policy/political science from CEU, an MA in political science from CEU (1999) and a BA in journalism from Stockholm University (1997).

Laszlo Bruszt is a Professor at the Department of Political Science, CEU, teaches sociology and political economy. In his research projects he deals with issues linked to the politics and the political economy of making transnational markets. Part of his projects deals with the comparative study of market integration regimes, with a focus on the integrations involving economies at different levels of development. Their edited volume with Gerry McDermott on transnational regulatory integration and development was published by Oxford University Press. It brings together studies from Latin America and Eastern Europe. His new project focuses on the EU strategies of integrating its Eastern and Southern peripheries.

SNACKS AND DRINKS WILL BE PROVIDED

The workshop is organized by the Doctoral School of Political Science, Public Policy and International Relations, in the “Workshops on Academic Practice” series.