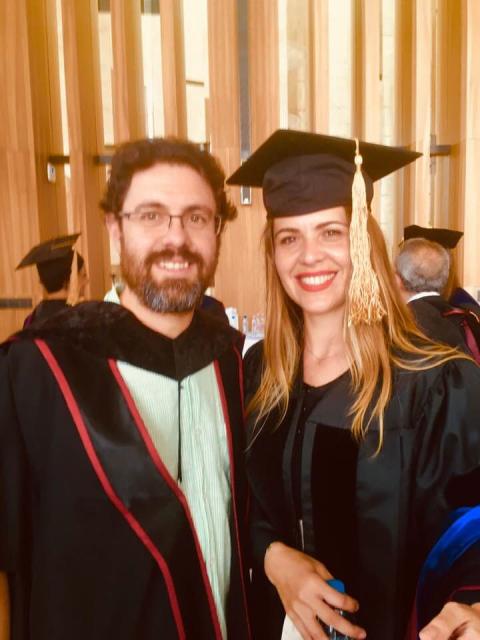 Georgiana Turculet (POLS PhD `18) and her story about the program:
„Through a chain of friends, I got in contact with Silvia Fierascu, to whom I asked questions about her experience as a student at CEU. As I put the phone down, I felt certain that CEU was for me. I ended up accepting the PhD offer from CEU thanks to Silvia’s enthusiasm about the program and her friendliness. Later Silvia and I, perhaps unsurprisingly, became wonderful colleagues in the same PhD program and sincere friends. And now, as we became both Doctors, we continue supporting each other in the advancement of our careers. The human capital – at CEU - was the ingredient that blew me away before I even set foot in there, it made my PhD experience irreplaceable, and after graduating and leaving CEU, it made me feel that I am a part of an intellectual family, wherever I will be.

As Silvia had informed me on the phone that my experience at CEU would be, I ended up working alongside incredibly talented faculty and students from all over the world. For many, the language of instruction, English, most often was not their first language, but the third, fourth or even fifth. This shows how incredibly rich was the cultural and linguistic background, which every individual would bring as original perspectives in classrooms, in informal events and in friendships. All PhD candidates in my program were working in a condition of equality from the point of view of scholarship coverage, no matter where they were from. Unlike anywhere else I have been in the Academy, in CEU there was no hierarchy between natives and foreigners. We were all scholars in class, colleagues in the corridors, and friends in bars and cafes. Everyone of us came from a diverse and unique background - which we celebrated together.

CEU in Budapest, as I experienced it during my PhD was a happy island, on which an incredibly progressive social project took place. A CELEBRATION OF DIVERSITY. A celebration, which is regretfully missing even in the most advanced societies of our times.

Overall, I chose to pursue a PhD degree at CEU because of the academic excellence of its programs, its unique well-balanced hybrid between the American and European academic traditions, and the incredible vibrancy of its campus. At that point in my life, Budapest and CEU were the location and institution at which I wanted to be – it felt like a perfect fit. It fully was."

Photo Caption: This photo is taken during the Graduation Ceremony 2019. The original Facebook post on my personal wall reads:
“Ceremonial outfits for granny who could not attend in person. Today Andres will help me wear that fancy academic hoodie on the stage. From the bottom of my heart, thank you, Andres for having been the best supervisor & mentor I could have ever hoped for!”