From Poverty to Prosperity: Challenges in International Development by Andras Horvai, World Bank 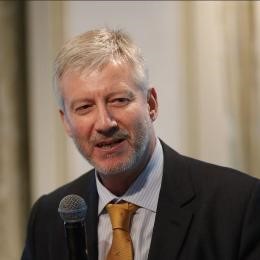 Andras Horvai is the World Bank’s Country Director and Resident Representative in the Russian Federation. Before his current assignment, he managed the World Bank Group's Office in Vienna and the portfolio of World Bank-financed projects in the countries of Southeast Europe. Since joining the World Bank in 1993, Mr. Horvai has worked extensively on Europe and Central Asia, including the countries of Southeast Europe, Turkey, Poland and Russia, as well as South Asia. He also served as the World Bank's Country Manager for Croatia. Prior to his World Bank career, Mr. Horvai held senior positions at the National Bank of Hungary, including General Manager, Director for International Development Institutions. He also served briefly as Alternate Executive Director of the European Bank for Reconstruction and Development right after its inception. Mr. Horvai is a graduate of the University of Economics, Budapest.

Lecture Summary
The world has made tremendous progress in reducing extreme poverty over the past decades. Inequality across countries has also narrowed, leading to increased convergence around the world. However, the progress in poverty reduction has been geographically uneven and in-country inequalities have also grown. Globalization has helped the income growth in developing countries but many in the middle class in advanced economies have been negatively affected. Is globalization reversible? Managing international conflicts, migration, climate change and various natural and man-made crises requires strong global leadership while multilateralism is under threat. Short-term global economic prospects are also marred by uncertainties of the trade war and excessive levels of sovereign debt. Disruptive technologies offer new opportunities for development but also pose challenges. The rapidly changing nature of work requires new skills. Investing in human capital and narrowing the infrastructure gap in developing countries would enhance economic growth and incomes. There is an increased role for the private sector in infrastructure financing and for a strong multilateral development system to complement domestic public policy efforts.